How Long Does it Take Snapchat to Review a Geofilter Submission?

After you submit a Snapchat Geofilter, you will receive an email confirmation of your submission. However, you don’t know exactly when you will hear back.

Naturally, you may be wondering:

“How long will it take to get my geofilter reviewed?”

I’ve submitted quite a few geofilters this past year and a half. So, I will share how long they have taken me to get reviewed, as well as when you may be able to expect your results.

Community geofilters are the hardest to predict because they are reviewed in the order they’re received. You will see different results depending on the amount of requests Snapchat is receiving, the date you submit yours, and the country you’re in.

Sometimes the results can vary drastically. Here are a few real examples with very different outcomes.

In Early 2015, when I created my first geofilters, they only took a few days to be reviewed.

I submitted my Hanford Geofilter in April 2015.

My first Community geofilter was accepted in 3 days.

So, it’s possible that Snapchat may reject your geofilter if you submit multiple geofilters for the same area, that are similar.

My Sac State geofilter was submitted in July 2015.

This one was rejected within 1 day, and I resubmitted it.

My second Community geofilter was accepted in 2 days.

2016 geofilter submissions take much longer than 2015 submissions, due to two main reasons:

Also, with the rise in popularity of geofilters, now there are more geofilters being submitted. This makes the review process take longer as well.

My latest Community geofilter was for Purdue University. It was submitted in April 2016, just over a month after On-Demand geofilters were released.

My last geofilter took 5 weeks to be reviewed.

Although 5 weeks may sound long (and it was to me), yours may take even longer. As popularity increases in the coming months and years, the number of submissions and the amount of time it will take will likely increase as well.

On top of that, if you are submitting a geofilter outside of the U.S. yours will likely take longer than mine did.

For example, here is a comment from this article from a person who submitted two Community geofilters in Canada in 2015:

On the 17th I was emailed their declination.

This was in Canada, and they are very clear that the US is their priority and they don’t care much for submissions outside of the US.

Update: A few months later, I just got notice that one of the ones I submitted and never heard back about, is now live.

I have also seen and heard several accounts that have taken much longer.

Some geofilters have taken months to be reviewed.

Snapchat has said they’re looking to expand more of their efforts worldwide soon, so this extended wait could be reduced in the upcoming months.

On-Demand geofilters are known for their speedy review process. These are purchased, they have priority review status, and are limited to the US, UK, and Canada as of right now.

As a result, On-Demand geofilter have around a 1-day or less review process. Although this is true most of the time, review times can vary just like Community geofilters do.

I had just finished submitting a personal geofilter for a client that was a couple days away. Within the hour, I received an email with the confirmation that is was approved.

Most of my On-Demand geofilters have been reviewed within 24 hours.

Although this is the most common amount of time it will take, there have been a few instances, where it has exceeded 24 hours.

I tend to submit my On-Demand geofilters a week or several days in advance to give me time to resubmit if it were to get rejected.

However, because On-Demand geofilters claim to have a 1-day turn around, many people submit them the day before. This often means if you submit your geofilter early, Snapchat may postpone your review in order to review more urgent geofilters.

One of My On-Demand geofilters took 7 days to be reviewed.

Mostly likely because of the Fourth of July weekend, there were a lot of geofilters to approve last minute. So rather than review mine that weekend, they postponed my review until it was closer to the actual date.

On-Demand geofilters are not reviewed in the order that they are received, like community geofilters are. It’s based on which ones are closest to their actual display date.

Get the Free Geofilter Design Guide! 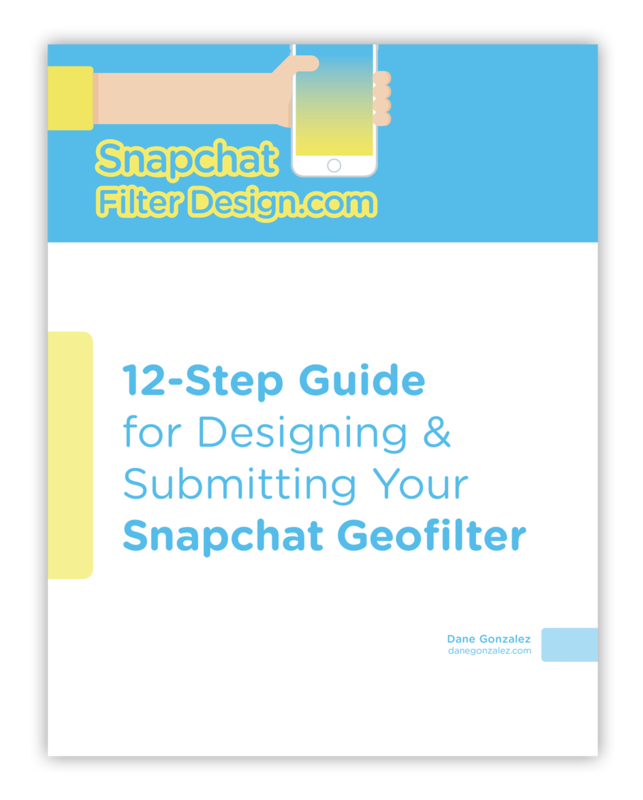 Subscribe to get the FREE Geofilter Design Guide. It includes 12-steps to design & submit your geofilter. You’ll also get free lessons from the Snapchat Filter Design Course

Success! Now check your email to confirm your subscription. Be sure to check your spam folder if you don't see the email.